It’s the sneaker’ symbol of recognition, as well as, the one who represents the identification of heavenly dimension and of the spiritual self ( or “spiritual being”).

The vertical line crosses the entire front part of the sneakers, starting from the tip, passing through the tongue and ending on the back of the shoe, conveying a sense of continuity and infinity. 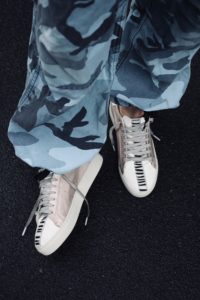 Living under the influence of the number 11 requires a constant use of energy, the person devoted to the eleven is considered by the society as “different”, his opinion and his word are highly requested and sought after.

Among the most important personal requirements of the individual linked to the 11 we find the intensity, the eccentricity, the intuition, the idealism and the ultimate goal is that of living chasing what has always wanted and dreamed.

The attitude of who is influenced by the 11 is that to fight for the truth and to change according to the changes, is also refractory to both boredom and fatigue, hates and fears the imposed limits.